JaMarcus Russell: The most maligned figure in football tells his side of the story 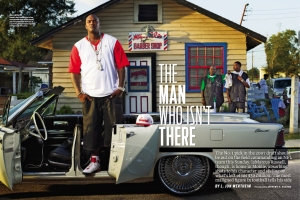 From a chair in Maysville Barber Shop in Mobile—where he goes to have his head shaved three or four times a week—JaMarcus Russell tells senior writer L. Jon Wertheim (@jon_wertheim) his side of the story. Russell says that few people are aware of the factors that worked against him during his time with the Oakland Raiders, including:

Unbeknownst to many, Russell has given generously to his hometown of Mobile. He’s paid for turkeys at Thanksgiving food drives, bought supplies and library books for local schools and uniforms for local sports teams, underwritten the renovation for his church, built ramps for wheelchair-bound residents and rewarded kids with straight A’s with bikes, MP3 players and GoPhones. Russell says: “If I do go broke, it’s going to be from providing for my neighborhood and my family.” So why isn’t his charitable work better known? “My business is my business. That’s how I prefer it. I gotta look up to God. I don’t gotta look out to no damn news cameras!”

END_OF_DOCUMENT_TOKEN_TO_BE_REPLACED

SI’s history of covering sports in the Motor City

This week’s Oct. 10 issue offers a celebration of sports in Detroit. The national cover featuring Calvin Johnson marks the first time in nearly nine years that the Lions have landed on the cover. In addition, senior writer Tom Verducci recognizes Tigers G.M. Dave Dombrowski for his role in the 2009 trade that has shaped this year’s postseason.

This is hardly the first time that Sports Illustrated has covered the sports pulse of the Motor City. Between January 2009 and March 2010, SI contributed six stories to Time Inc.’s Assignment Detroit Project—each of which drew a strong parallel to the struggles of the city and how sports offered both an analogy for those struggles and a sense of hope.

END_OF_DOCUMENT_TOKEN_TO_BE_REPLACED

Recapping Beyond Sport United: Jon Wertheim on his interview with Luma Mufleh

Yesterday at Yankee Stadium, Sports Illustrated served as the official media sponsor for Beyond Sport United — a first-of-its-kind symposium focusing on how teams can effect social change in their communities. The event, which was supported by the NFL, MLB, NBA, NHL, MLS and WNBA, brought together representatives of more than 75 professional teams from around the world, along with league officials, business and government figures and grassroots entrepreneurs to share information, ideas and positive practices.

As part of the agenda, senior writer Jon Wertheim (@jon_wertheim) conducted an on-stage interview with Luma Mufleh, who was profiled by Gary Smith (Sports Illustrated, 6/23/2008) for her work as a youth soccer coach for young war refugees living outside of Atlanta. In addition to being blown away by Mufleh’s story — which has been chronicled in the New York Times and on CNN, The Today Show, ESPN and The Early Show — Wertheim learned a lot about how she is currently drawing attention to her cause.

END_OF_DOCUMENT_TOKEN_TO_BE_REPLACED

Another Letter to Miami Asking Them to Drop Football, Why a 154-Game Season Would be Good for Baseball, Jim Harbaugh Channels the Spirit of Bill Walsh, The Day That Damned the Dodgers and More from the Aug. 29 Issue 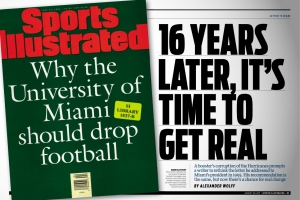 You’ve seen the Brewers “living the high life” on this week’s cover. This week’s Aug. 29 issue also includes the following:

1. Time for Miami to Get Real: Sixteen years ago, senior writer Alexander Wolff asked then University of Miami president Tad Foote to dismantle a Hurricanes football program that had run amok and then some. Now, history has repeated itself. Read Wolff’s updated letter – this time addressed to Donna Shalala – addressing the Nevin Shapiro scandal by visiting Sports Illustrated’s official Facebook page. Click “Like” at the top of the page if you are not already a fan, then click “Fan’s Only” on the left-hand side of the page to read Wolff’s letter.

2. The 154-Game Solution: Senior writer Joe Posnanski argues that shortening the MLB season by eight games would not only shorten a season that seems endless as it is, it would also lend proper context to the home run records warped by the steroid era.

3. Jim Harbaugh: The new Niners coach is looking to the past and embracing the teachings of Bill Walsh – who, like Harbaugh, also made the jump from Palo Alto to the pros – hoping to achieve the same level of success as San Fran fans hope they’ve finally found a worthy successor.

4. The Day That Damned the Dodgers: When Giants fan Bryan Stow was beaten into a coma in the Dodger Stadium parking lot on Opening Day, it marked the latest black eye for a once-proud franchise. Senior writer Lee Jenkins finds out more about what the team – and the city of L.A. – have done in response.

5. 2011 U.S. Open Preview: Senior writer L. Jon Wertheim lists seven players to keep an eye on and takes a closer look at what makes the last tennis major of the year so profitable – and why U.S. tennis is in the dark ages in spite of that.

6. Which manager would major league players most like to play for? 291 players weighed in for this week’s MLB Players Poll.

Read on for more.

END_OF_DOCUMENT_TOKEN_TO_BE_REPLACED

ON THE COVER: An Exclusive Investigation on the Fall of Jim Tressel

A Baseball Lifer’s Comeback From Losing His Left Eye 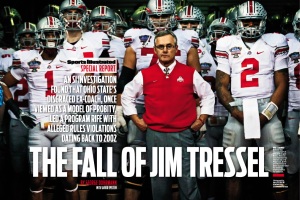 A Sports Illustrated investigative report by senior writer George Dohrmann (@georgedohrmann) with staff writer David Epstein (@SIDavidEpstein) reveals a program rife with alleged NCAA rules violations. The new allegations are that the memorabilia-for-tattoos and cash violations stretch back to 2002, involve at least 28 players (22 more than had previously been reported) and that Buckeyes traded memorabilia for marijuana. Former OSU defensive end Robert Rose spoke on the record about his dealings and an anonymous source points to a much deeper relationship between Fine Line Ink and OSU players that involves tickets, cars and favors (page 40).

To read the full online version of The Fall of Jim Tressel, click here.

On the Tablets: A gallery of the 28 former and current players who Sports Illustrated has learned traded memorabilia, plus an audio podcast interview with George Dohrmann.

THE OLD MAN AND THE HEAT – LEE JENKINS (@SI_LeeJenkins) 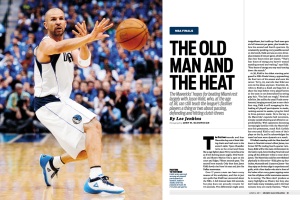 At 38, Jason Kidd is the oldest starting point guard in NBA Finals history yet still leads all playoff participants in steals, ranks second in assists and is tied for third in three-pointers made. Most important, the pass-first Kidd is the key to the Mavericks ball movement, outside shooting and offensive unpredictability. Teammate Tyson Chandler says (page 50): “He’s the one who keeps us under control, who makes sure we keep our head. Sometimes Jason hits you in a place where you don’t think you can make a play but he knows you can.”

Dallas Mavericks President of Basketball Operations Donnie Nelson says: “We needed somebody to make Dirk’s job easier. That was Jason Kidd. He was the godsend for Dirk. He is the reason Dirk is fresher now.”

To read the full online version of The Old Man and the Heat, click here.

DEEP IN THE HEART OF THE CITY: LEIGH MONTVILLE 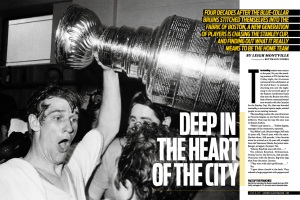 Four decades after the blue-collar Bruins stitched themselves into the fabric of Boston with Stanley Cup triumphs in 1970 and ’72, a new generation of players attempts to recapture that former glory. Simultaneously they’re finding out what it really means to be the home team. Recalling the Bruins’ Stanley Cup days in the early 1970’s, Derek Sanderson says (page 68): “You’d get everything for free. You’d go to a restaurant, eat for free. Go somewhere else, drink for free. Free clothes. You’d get gas. No problem. I never had a date the whole time I played in Boston. Not a date where you went to the girl’s house, picked her up. You just went to the bar. Come around midnight, you picked out who you wanted.”

To read the full online version of Deep in the Heart of the City, click here.

On the Tablets: A gallery of great moments from the Bruins’ Stanley Cup wins in 1970 and ’72. 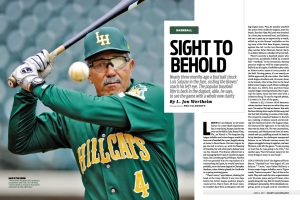 Nearly three months ago a foul ball struck Braves’ coach Luis Salazar in the face, costing him his left eye. He has returned to the dugout to manage the Braves Class A affiliate in the Carolina League while gaining a whole new perspective on the game. As he describes it (page 62): “In a way, I see more now than I did with two eyes. I see friends, teammates I haven’t spoken to in 25 years. I notice more around the ballpark. It’s maybe crazy to say, but in some ways it’s been a blessing.”

To read the full online version of Sight to Behold, click here. 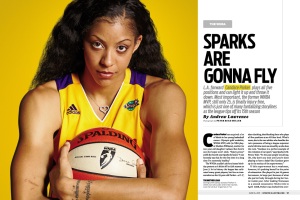 Los Angeles Sparks forward Candace Parker plays all five positions and can light it up and throw it down. Most important, she is finally injury free—a tantalizing storyline as the WNBA tips off its 15th season. After she shut herself down for 2010 while dealing with injuries and caring for her daughter Lailaa, the 25-year-old Parker regained a sense of fundamentals. As she recalls (page 56): “Before I could just jump over people to get a rebound or get a shot off by out-athleticizing people. But at that moment, I couldn’t do that. I actually had to box out. I actually had to use a jab step to set up my move. I had to be more effective and efficient and that’s helped my game.”

To read the full online version of Sparks Are Gonna Fly, click here.

Who is the most overrated player in baseball?

[Based on 185 MLB players who responded to SI’s survey]

FAST FACTS: A-Rod and Chamberlain filled the top two slots in the same poll last year but in reverse order. . . . Yankees OF Nick Swisher also received 4% of the vote. . . . Of the top 14 active vote-getters, all but three play in Boston, Chicago or New York. . . . Combined, the five players above have made the All-Star Game in 57% of their seasons.

Facing cancer, senior hockey writer Michael Farber ponders the complete work of Lance Armstrong. Farber points out how Armstrong’s dedication towards raising money and awareness for cancer research sets him apart from Roger Clemens, Barry Bonds and other star athletes who currently face doping allegations. In spite of his own controversies Armstrong remains an inspiration to millions of people fighting cancer—including one of Sports Illustrated’s own (page 16).

To read the full online version of Band of Brothers, click here.

While many athletes have made statements against gay bashing, they cannot take away the chilling effect of a player—including recent examples Kobe Bryant and Joakim Noah—casually tossing out a single humiliating word. Austin Hendrix, a cross-country runner at Eastern Michigan who told his team two years ago that he was gay, says  (page 76): “The problem is that words like those have become so intertwined with everyday vocabulary that it can be difficult to tell if they are being said out of hate or just out of habit.”

With news that the Mavs’ Shawn Marion is taping a reality show pilot, The Ladies of My Life, about his mom and three sisters, the TV experts at the Onion dug up six sporty reality pitches that (thankfully) will never make it to air (page 18):

THIS WEEK’S FACES IN THE CROWD (page 27)

INSIDE THE WEEK IN SPORTS (page 28)

THIS WEEK ON THE TABLETS