The NFL’s fastest player: Titans RB Chris Johnson wins with 38% of the vote 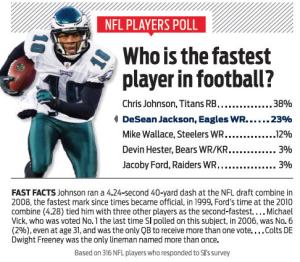 SI PLAYERS NFL POLL (as it appears in the Oct. 31 issue)

Who is the fastest player in football?

[Based on 316 NFL players who responded to SI’s survey]

JaMarcus Russell: The most maligned figure in football tells his side of the story

From a chair in Maysville Barber Shop in Mobile—where he goes to have his head shaved three or four times a week—JaMarcus Russell tells senior writer L. Jon Wertheim (@jon_wertheim) his side of the story. Russell says that few people are aware of the factors that worked against him during his time with the Oakland Raiders, including:

Unbeknownst to many, Russell has given generously to his hometown of Mobile. He’s paid for turkeys at Thanksgiving food drives, bought supplies and library books for local schools and uniforms for local sports teams, underwritten the renovation for his church, built ramps for wheelchair-bound residents and rewarded kids with straight A’s with bikes, MP3 players and GoPhones. Russell says: “If I do go broke, it’s going to be from providing for my neighborhood and my family.” So why isn’t his charitable work better known? “My business is my business. That’s how I prefer it. I gotta look up to God. I don’t gotta look out to no damn news cameras!”

END_OF_DOCUMENT_TOKEN_TO_BE_REPLACED

For his Point After column on Denver Broncos quarterback Tim Tebow, senior writer Phil Taylor talked to another former Heisman Trophy winner who many experts believed would never be successful in the NFL, Doug Flutie. According to Flutie, the skepticism about unorthodox quarterbacks is just as strong as it was 25 years ago. Among the quotes Taylor collected from Flutie, in addition to those used in his column:

“Everybody wants to tell you what Tebow can’t do, instead of looking at all the things he can. It’s ridiculous. The Colts were 3-13 in Peyton Manning’s first year, but they gave him time to develop. Tebow won’t get that time. Lots of quarterbacks struggle early in their careers, but people make a final judgment on guys like him much earlier. They’re just looking for a reason to dismiss him and say, ‘He can’t play.’ ”

END_OF_DOCUMENT_TOKEN_TO_BE_REPLACED

Sports Illustrated Football Rivals provides fans with an in-depth look at some of the greatest rivalries in football history — some of which extend for nearly a century — all through our unmatched editorial coverage.  Dynamic features include more than 300 pages of content, rare photos, 3D interactivity, documentary style videos, game highlights, an interactive timeline of each rivalry, historical stats and more.  The app is a must have for football fans.

Read the full press release after the break.

END_OF_DOCUMENT_TOKEN_TO_BE_REPLACED

With the college football embarking on its second weekend and the NFL season kicking off last night, SI.com’s bloggers have you covered. So who is it that will keep you updated on everything that happens on and off the gridiron this fall? Get to know the folks behind our college football blog, Campus Union, and our NFL blog, Audibles.