Who is the meanest player in football? (page 19)

[Based on 287 NFL players who responded to SI’s survey]

FAST FACTS: No, commissioner Roger Goodell did not have a vote, but Harrison, the NFL’s most-fined player of 2010, was still the runaway winner. (And getting sidelined indefinitely with an orbital fracture on Oct. 2 isn’t likely to mellow him.) Sixty-eight players were named at least once, with linebackers (13) leading the way. Four QBs each got a single nod, as did the Lions’ Jason Hanson, who must be one ornery kicker. In a Facebook poll, Suh (40%) led Lewis (31%) and Harrison (23%). No one else was above 1%.

Also from Sports Illustrated: The nicest player in the NFL, the trade that shaped the Division Series and Brandon Jennings’ Twitter hoops tour

You’ve seen all three of this week’s Oct. 10 covers and read about the rise of both the Lions and Alabama’s defense and seen our NHL predictions. Here’s what else is in this week’s issue, on newsstands now.

Who is the nicest player in football? (page 17)

[Based on 272 NFL players who responded to SI’s survey]

FAST FACTS: Polamalu, the 2010 Defensive Player of the Year, is known for his devastating hits (any chance Joe Flacco voted for him?), but he has clearly made an impact with his personality as well. He, Eagles CB Nnamdi Asomugha (2%) and Broncos S Brian Dawkins (1%) are the only defensive players in the top 15. (Eight of those first 15 are QBs.) In a Facebook poll Broncos QB Tim Tebow (39%) was the fans’ pick for Mr. Nice Guy.

END_OF_DOCUMENT_TOKEN_TO_BE_REPLACED

Also in This Week’s Sports Illustrated: The Meanest Player in MLB, The End of the “Outrage Open” in Flushing, Predictions for the Most Competitive NASCAR Chase Ever and College Football’s Ultimate Underdog 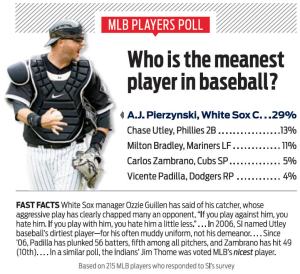 You’ve seen the three covers for this week’s issue, out on newsstands now. The Sept. 19 issue of Sports Illustrated also includes the following.

Who is the meanest player in baseball? (page 22)

[Based on 215 MLB players who responded to SI’s survey]

FAST FACTS: White Sox manager Ozzie Guillen has said of his catcher, whose aggressive play has clearly chapped many an opponent, “If you play against him, you hate him. If you play with him, you hate him a little less.” … In 2006, SI named Utley baseball’s dirtiest player—for his often muddy uniform, not his demeanor…. Since ’06, Padilla has plunked 56 batters, fifth most among all pitchers, and Zambrano has hit 49 (10th)…. In a similar poll, the Indians’ Jim Thome was voted MLB’s nicest player.

Read on for more after the break.